Do Chinese Fashion Bloggers Have What It Takes for Luxury Brands to Succeed? 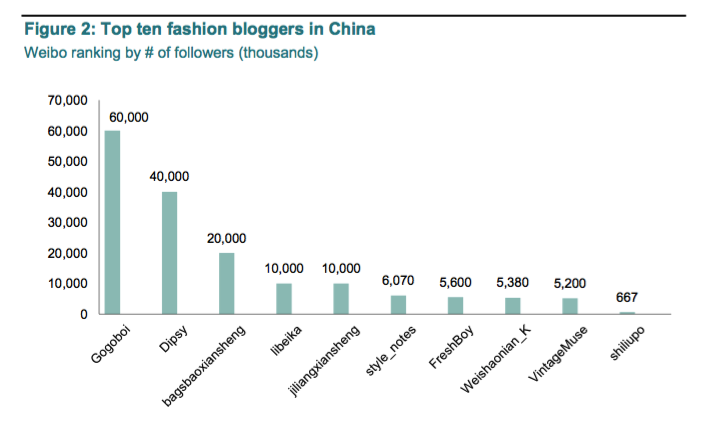 The report ranks China’s most influential fashion Chinese bloggers bloggers based on their number of Weibo followers, and some of the most familiar names come out on top, including Gogoboi (ranked #1) and Mr. Bags (#3). Their social media feeds cover a wide range of content that varies from blogger to blogger. For example, Dipsy (called Dixi in Chinese, #2), and Vogue China columnist, whose Weibo handle is weishaonian_k (#8) both post about seasonal collections, runway shows at major international fashion weeks, and Chinese celebrities’ cooperation with brands. Fashion columnist with the handle libeika (#4) and shiliupo (#10) are styling experts who pair products from different brands to show readers how to dress.

The report illustrates that thanks to their vast number of followers, fashion bloggers are equally useful or even better than media coverage and advertisement to create buzz in China, unlike in the West, where bloggers are less influential for luxury brands compared to celebrities and fashion media outlets. This is because the rise of fashion bloggers and the development of the Chinese luxury market happened in tandem. The report explains that fashion bloggers “have filled a void on the internet ahead of luxury/fashion brands and publishers” in educating Chinese consumers about different brands.

However, when it comes to actually transferring popularity from the fashion Chinese bloggers to luxury brands, brands have to pay attention to more than just a blogger’s number of followers. Luca Solca, the author of the report and the head of luxury goods at Exane BNP Paribas, said social media following is not a good enough metric to gauge a blogger’s value. “The number of social actions [likes, shares, and comments] and posts is a much better indicator of social media traction,” he said.

Examples of successful collaborations include Gucci’s turnaround in 2016, which can be said to be because of Chinese fashion bloggers who first caught on to the new designs and promoted them to consumers. Earlier this year, a capsule collection released jointly by Mr. Bags and the handbag brand Strathberry also attracted praise online. Not all matches are perfect though—when Gogoboi took over the Weibo handle of Louis Vuitton during Paris Fashion Week Fall/Winter 2015, Chinese internet users sniffed at Louis Vuitton’s choice as they thought Gogoboi’s style did not fit with the brand image. In his latest Weibo campaign for Fendi, the number of comments under his post also dwarfed the average level of engagement he is able to generate.

What is possibly the biggest reason for brands to be cautious about seeking a one-on-one partnership with a fashion Chinese bloggers is the unclear relationship between sales and influencer marketing. After Gogoboi’s November Fendi campaign, the brand’s parent company LVMH reported in its 2016 annual report that Fendi saw sales growth in China’s market. The two events may be correlated, but such correlation does not imply causation.

Mr. Bags’ recent collaboration with Givenchy is another interesting case. Turning WeChat into a social e-commerce site, Mr. Bags gave his followers access to buy his exclusive Valentine’s Day edition Givenchy “Mini Horizon” handbags. He reported that 80 handbags were sold out in 12 minutes, but it remains unknown if such an astonishing achievement can be completely credited to his influence or if it’s a result of “hunger marketing,” a promotional strategy used by brands to boost customers’ desire to buy their new products by limiting supply. This strategy has been frequently used by Chinese brands, such as tech company Xiaomi, and has proven successful in drumming up sales in the short term.

Airbnb will change his name in China?