The controversies surrounding Italian fashion brand D&G in China have been dominating Weibo’s top trending lists. Because it’s a somewhat messy affair, we’ll explain the story hashtag by hashtag. November of 2018 will go down in Dolce & Gabbana history for the China marketing nightmare that has been unfolding over the recent days. The Italian fashion house, that has been founded in 1985 by designers Domenico Dolce and Stefano Gabbana, is now facing consumer outrage and backlash on Chinese social media. Chinese e-commerce sites have removed Dolce & Gabbana products and Chinese netizens are posting photos of empty D&G stores.

On Sunday, November 18, Dolce & Gabbana posted three videos to social media in a series titled “Eating With Chopsticks” in light of its “DG Loves China” campaign, promoting its upcoming big fashion show in Shanghai that would take place on Wednesday, November 21st. The brand had been doing quite well in China in the month before. The Digital Crew website wrote in October that D&G had “hit the nail on the right spot” with their recent move to cast Chinese celebrity Dilraba Dilmurat and Chinese stylist Han Huohuo at their Milan fashion show catwalk, receiving praise from Chinese netizens. Its new video campaign, however, was not received with praise. The videos feature a Chinese-looking model dressed in D&G clothes using chopsticks to eat Italian dishes such as pizza, cannoli, and spaghetti. Unsuccessful at clumsily trying to eat these dishes, a male Chinese voice-over in the video then suggests things such as that the cannoli might be “too big” for the lady, and that she could try by digging in and eating smaller pieces with her chopsticks.

(Watch all clips here on Youtube and judge for yourself.) The clips were not much appreciated for various reasons. Some Chinese netizens thought the campaign was making fun of Chinese chopsticks, others thought the comment of the Italian bread being “too big” for the Chinese model had a sexist undertone. 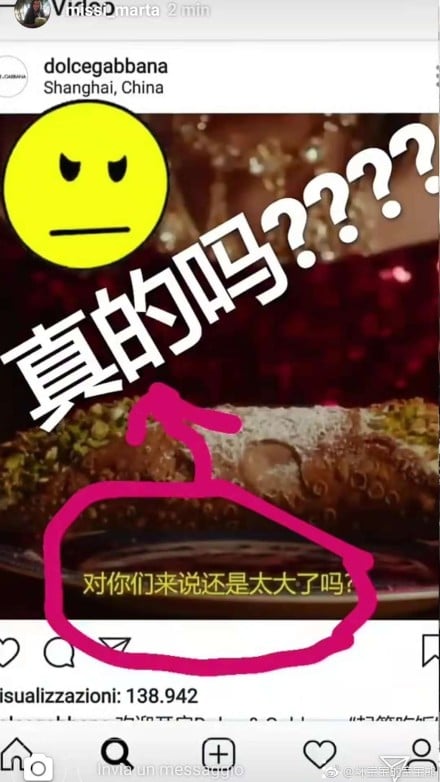 “A disgusting campaign,” some called it. Meanwhile, English-language media wrote that Dolce & Gabbana’s latest campaign was called “racism” by Chinese. Although the ad was indeed called racist by some Chinese on Weibo, the majority of commenters were mainly upset about the portrayal of chopsticks in the series. The hashtag “D&G Ad” (#DG广告#) received 170 million views.

WEDNESDAY, NOVEMBER 23 “D&G SUSPECTED OF INSULTING CHINA” #DG涉嫌辱华# 410 MILLION VIEWS – The social media storm snowballed out of control after screenshots of comments attributed to fashion designer Stefano Gabbana went viral on Wednesday, also being reposted by major Chinese state media accounts such as Global Times. Various Instagram screenshots showed how, from the account of Stefano Gabbana, statements were made about China being a “shit country” and other derogatory remarks.

The screenshots were posted by Instagram user Michaela Phuong Thanh Tranova (@michaelatranova), a fashion business student, although it is still unclear why this Instagram user would have a private Instagram conversation with Stefano Gabbana and whether or not they are acquainted. The statements went viral on Chinese social media, where they led to waves of criticism and anger, with people defending China and calling for a boycott of D&G.

WEDNESDAY, NOVEMBER 21 “DG BIG SHOW CANCELED” #DG大秀取消# 820 MILLION VIEWS – Later on Wednesday, the D&G issue hit the topic trending lists on Weibo, when it was announced that the big Shanghai fashion show was called off. According to Jing Daily, it was China’s Cultural and Tourism Department that ordered Dolce & Gabbana to cancel the event, just a few hours before it was scheduled to take place and amid reports that Chinese celebrities were canceling their attendance at the show for the fact that the brand was “insulting to China” (辱华).

The official D&G account did not mention the reason for the cancelation, nor who ordered it, but just wrote on Weibo: “The fashion show that was planned on November 21st at 20.00 has been rescheduled due to circumstances, we deeply regret any inconvenience caused.” By now, the online anger about D&G insulting China through its ad and Gabbana’s statements had grown so big, that most people simply wished for the Italian fashion house to “get lost.”

FRIDAY, NOVEMBER 23 “DG USES CHINESE TO APOLOGIZE” #DG用中文道歉# 360 MILLION VIEWS – On Friday afternoon, China time, Dolce and Gabbana released an aThe two speak in Italian as they say that they “feel very grieved” over what their “statements and actions” have brought about “for Chinese people and their country” over the past few days, and that they hope they can be forgiven for their “misunderstanding of [Chinese] culture.”

Before midnight, the video had received more than 166,000 comments and more than half a million shares. Over 100,000 people ‘liked’ the post. Among the most popular comments, there were those inquiring if Gabbana’s Instagram had been hacked or not, since the video does not mention it. “Were you hacked or not, because if you weren’t, then I won’t accept your apology,” one of the most popular comments said.

FRIDAY, NOVEMBER 23 “Requesting D&G Money Back” #DG柜姐回应退预存金# 160 MILLION VIEWS – Meanwhile, a screenshot of a WeChat conversation between a customer seeking a refund and a representative from Dolce & Gabbana Hangzhou also has gone viral on Chinese social media, ending up in the top ten charts of the day. The screenshots show that the woman demands back a deposit she paid D&G of 2400 yuan ($346), saying she no longer wants to wear the brand for fear people would “throw sh*t at her.” D&G Hangzhou then responded to the issue, saying that they would not refund money because of this “temporary crisis.” “A temporary storm can also turn into a permanent one,” some commenters said. Whether or not this “temporary” storm will indeed turn into a serious long-term China marketing crisis for D&G is yet to be seen. In the past, Daimler China also found itself at the center of a social media storm in China after using a Dalai Lama quote in its advertisement in March of this year (listen to this BBC news fragment here), which seemingly had little consequences for the brand, as it is still expanding in China.

If you don’t want to make mistakes in China, contact us!

Cultural Marketing, the biggest key to success for brands in China

Xiaohongshu, the place where Influencers are