With the rise of live streaming apps like Yizhibo, Inke, and Huajiao, live streaming videos have become incredibly trendy in China.  This is particularly true when it comes to the e-sports & video games industry. This can be seen in the West as well with the success of Twitch, which was acquired by Amazon in 2014 for 940 million dollars.

Live streaming combined with video games has become one of the most popular forms of entertainment for people in China.  The China esports market is the second largest in the world behind the United States, with the two of them nearly generating 50% of esports revenue worldwide. There are two dominant video-gaming platforms (similar to Twitch) in China at the moment, called Douyu (斗鱼) and Huya (虎牙直播).

Huya reportedly had 99 million MAU and 4.2 million paying users as of Q3 2018 as stated in their unaudited financial statements.  They are listed on NYSE in 2018 the company listed on the NYSE with an IPO price of $12 per share. Huya received investment from Tencent on the same day it also invested in Douyu. Huya received RMB $438 million as compared to Douyu’s RMB $4 billion.

As you would expect, since these platforms focus on video games and e-sports, the audience would be made up primarily of young men. You would not be wrong if you were following this line of thinking.

“The surveys found that the China eSports market isn’t comprised of only the younger male generation. Instead, over 20% of China eSports viewers/users are females and parents; 24.3% are females and, of this group, 69% are between the ages of 21; and 30. 29% of eSports users are parents, 59% of which are between 31 and 40 years old.” as stated by Eric Gibbs in his analysis of the Tencent’s 2018 report on the E-Sports industry. 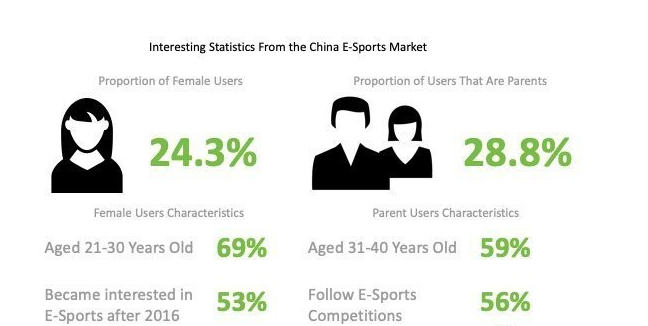 Of those interested in Esports,  72% of the esports users have watched esports content before and 36.6% of the users reported that they had only started in the past two years

It is no surprise to see that the most popular games on both platforms are almost the same. According to the charts, popular games like League of Legends (LOL), CS:GO, CrossFire, PlayerUnknown’s Battlegrounds (PUBG), Wangzhe Rongyao (Honor of Kings ) and DOTA are dominating on the video games live-streaming platforms like Douyu and Huya.

Advertising on Douyu and Huya

On both these live-streaming websites, there is a channel where companies sell/promote theirs products or services. This is especially convenient for businesses working with hosts who can direct users directly to where they can purchase the products they are promoting.On Douyu, the hosts can set their own advertisement preferences for their channel, which means it’s better for the companies who want to advertise during their broadcast to build a relationship with the hosts first.

As of January 2019, the most popular host on Douyu is called “旭旭宝宝” who has 820,000 fans and has accumulated over 33 million likes from other users, the total value of gifts (including cash) received from his fans has reached over RMB$20 million, which is super impressive!

On Huya, companies can appoint a certain host and pay them to sell their products in different ways, such as with floating QR codes, product placement etc.

As of January 2019, the most popular host on Huya is called “集梦阿布” with over 480,000 fans and the highest total value of the gift he received from his fans in one single stream was over RMB$1 million. For some reason his channel was down at the time of writing this, we’ll see if it comes back up soon.