How Advertisers Are Tapping Into?

Live streaming has exploded in China in the past year; in 2015, it was a $1.8 billion industry, according to Huachuang Securities, which predicted it could expand to $15.9 billion by 2020. And more advertisers are trying it, including P&G, Adidas and Sony. Marketers’ efforts range from straightforward to bizarre, elaborate pieces of performance art. Condom brand Durex promised a live show with 50 couples in bed; they performed calisthenics and snacked on bananas, but there was no actual hanky panky, which annoyed viewers.

Live streaming is at the intersection of a few Chinese trends. Young Chinese consume a lot of video compared to the U.S. and it’s live, it’s interactive, it’s reality content, which is very popular in China.

To launch a double-chocolate Oreo flavor in China, Mondelez tapped two popular singers to ham it up in a live stream. One star, Da Zhangwei, had cookies shoved into his mouth while he sang Oreo’s ingredient list to the tune of a love song. Fans were asked whether the other singer, Xue Zhiqian, should eat an Oreo smothered with fermented bean curd and wasabi. They voted no; he did it anyway.

The show got 4.5 million unique live views when it aired early this month on four Alibaba platforms, according to Dentsu’s Carat, which was behind the campaign.

Some campaigns, like the effort from Oreo and Carat, tap directly into the mania for online shopping in China, the world’s biggest e-commerce market and the biggest internet market, with 710 million people online. Over the past three weeks, Carat says, 26 million people watched the Oreo video on Alibaba’s Tmall marketplace. 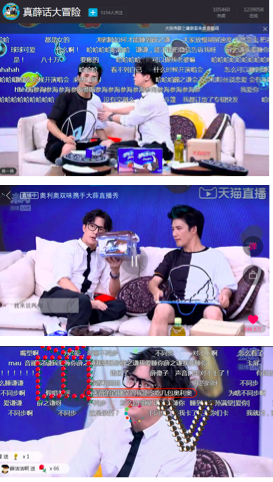 The buddy humor was designed to promote Oreo’s playful brand image and its new flavor, called Double Enjoyment. People could click a buy button on their mobile screen to drop the Oreos into their shopping cart. The live broadcast set a sales record for Oreo on Tmall, the agency said, without divulging specific numbers.

Advertising on the platforms is still in the early stages, and the industry is monetized mostly with virtual gifts from viewers to online hosts. Using mobile payments, people can send virtual flowers — even virtual yachts — to their favorite hosts. That gets transformed into real money, and the platforms take a cut.

The exchange of money is driving interest. But there may also be social factors behind why live streaming really caught on here. China has a huge population of migrant workers living far from home, says Amber Liu, CEO of local agency Amber Communications. They’re searching for connections online, as are young people who grew up as only children under the one-child policy. Live streaming is “a new and very important form of human connection,” said Mr. Liu, whose agency has done live streaming work for Adidas.China’s platforms seem to get more interaction than Silicon Valley’s; viewers’ comments, and emojis, often stream right over the videos, and hosts react to gifts and comments in real time.

There are dozens of local live streaming sites including Huajiao, Bilibili, Ingkee and YY. Internet giants like Alibaba and Tencent have invested in the area.